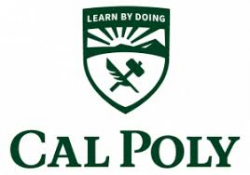 Founded in 1901, California Polytechnic State University (Cal Poly) is one of five comprehensive polytechnic universities in the U.S., with about 21,000 undergraduate and 900 graduate students. Cal Poly maintains a guiding philosophy of “Learn By Doing” that is reflected in the school’s comprehensive curriculum combining technical and professional training with the arts and humanities. When you graduate from Cal Poly, you won’t just know theory, you will be able to think critically and know how to solve real-world problems. Today, Cal Poly is among the most selective public universities in the United States. Under President Armstrong’s leadership, Cal Poly’s national reputation is growing and, according to payscale.com, the return on investment for graduating students is consistently on par with some of the most prestigious universities in California. Visit www.calpoly.edu to learn more.

Cal Poly is located in the beautiful Central Coast of California in the city of San Luis Obispo, about halfway between Los Angeles and San Francisco. This city is nestled in between great wine regions, relaxing beaches, and a small community. Our location gives students access to opportunities for hands-on research in agriculture, wine making, and distinct coastal ecosystems, as well as, close proximity to Southern California and the Bay Area for their tech, industry and the culture hubs. Given California’s status as a world leader in many areas and industries, our students have an opportunity to do work that makes an impact around the globe.

We recognize and celebrate the value of the different viewpoints, knowledge, cultures and skills that diverse communities bring to the educational experience. Cal Poly is committed to becoming a more diverse, equitable and inclusive environment where everyone has the opportunity to succeed and feel a sense of respect, belonging and personal safety. We’re not just a workplace — we’re a community.

Cal Poly consistently receives high rankings from major publications. For the past 27 years, we have been named the best public, master's-level university in the West by U.S. News & World Report. Forbes also continues to name us the top public masters-level university in California and one of the Top 25 public and private universities in the West.